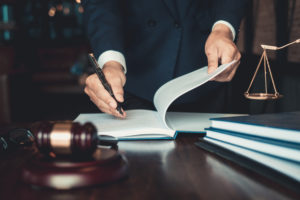 On January 16, 2020, pursuant to a plea agreement with the United States, a U.S. district court sentenced James G. Allen, Jr., a Pennsylvania anesthesiologist, to 30 months in federal prison for tax perjury after filing false joint tax returns with his wife.  The case is yet another example of the government’s crackdown and focus on tax crimes involving offshore assets and cryptocurrency.

Tax perjury is defined under Internal Revenue Code § 7206(1) as willfully making a false statement about a material matter on a tax return. Specifically, the crime is committed by any person who “willfully makes and subscribes any return . . . which contains or is verified by a written declaration that is made under the penalties of perjury, and which he does not believe to be true and correct as to every material matter.”  (For more on the crime of tax perjury, see our prior post here.).

The court found that from 2010 to 2018, Mr. Allen filed a series of false returns, failing to report more than $3 million in income. In addition to the false returns, the court found that Mr. Allen caused a loss of over $900,000 to the United States by attempting to hide assets from the IRS. In his attempts to conceal income, the court further found that Mr. Allen deposited money in an offshore bank account in the Bailiwick of Jersey, wired money to Columbia for the purchase of a house, purchased gold and cryptocurrency, and registered a vehicle under the name of a purported church.  (For more on the government’s continued crackdown on offshore assets and cryptocurrency, see our prior posts here.)

In addition to 30 months in prison, Mr. Allen was given a one-year term of supervised release and ordered to pay $1,084,658.82 in restitution to the IRS.  The sentencing is another reminder that taxpayers with undisclosed foreign accounts or financial activities, and taxpayers with unreported cryptocurrency transactions/holdings, should consult a tax attorney immediately.  Such taxpayers have options to reduce or remove their exposure (including criminal exposure), though quick action may be necessary to do so.  Particularly in light of the government’s focus on such activities, taxpayers and professionals should always consult a licensed attorney regarding such matters, as non-attorney tax professionals do not have a privilege over such discussions that is recognized in criminal matters.  (See our prior post here.).

Need help with tax issues?  Contact us as soon as possible to discuss your rights and the ways we can assist in your defense. We handle all types of cases, including complex international & offshore tax compliance.  Schedule a Consultation today!