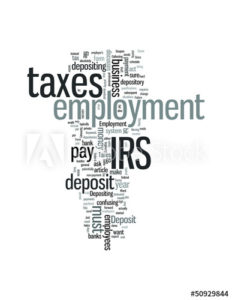 A federal district court held the owners of a restaurant personally liable for “trust fund” taxes—those taxes withheld by an employer from the wages of its employees.  United States v. Park, Case No. 5:14-cv-05664-EJD.  The case stands as a stark reminder of the personal liability that business owners (and other people working within the business) can face when a business fails to comply with its employment tax obligations.  But the order was served with an interesting twist: a five-year injunction against any failure to comply with future tax obligations, including withholding obligations.

“The Internal Revenue Code requires employers … to withhold federal social security and individual income taxes from the wages of their employees”—these taxes are known as “trust fund taxes.” Davis v. United States, 961 F.2d 867, 869 (9th Cir. 1992) (citing 26 U.S.C. §§ 3102(a), 3402(a)). “Although an employer collects this money each salary period, payment to the federal government takes place on a quarterly [or other] basis.” Id. “In the interim, the employer holds the collected taxes in trust for the government”—hence the term “trust fund” taxes. Id. (citing 26 U.S.C. § 7501(a)).  When those withheld taxes are not paid over to the government, as often happens with struggling businesses, so-called “responsible persons” (that’s the term of art used by the Code) can be held personally liable for those taxes.  I.R.C. § 6672  And that’s exactly what happened in Park.

But that alone is not a particularly remarkable event.  Business owners and key employees are held liable for unpaid trust fund taxes all the time.  The case was somewhat unique, however, for the court’s further step of granting affirmative injunctive relief against the taxpayers.  Under 26 U.S.C. § 7402(a), federal district courts “have such jurisdiction to make and issue in civil actions, writs and orders of injunction … and such other orders and processes . . .  and decrees as [are] necessary or appropriate for the enforcement of the internal revenue laws.”

Under this authority, the court issued an injunction requiring the taxpayers to comply with their obligations under the tax laws for a five-year period.  This is an unusual step, and it could carry some interesting consequences.  For instance, presumably a violation of the order could subject the taxpayers to contempt charges, allowing for a range of judicial remedies that could even include imprisonment for what would be a mere civil violation in the future.  It remains to be seen whether requesting such relief will become a more widely used weapon in the government’s tax enforcement arsenal.