Blockchain Technology Explained | What is Blockchain and How Does It Work?

Blockchain Technology Explained | What is Blockchain and How Does It Work?

What is Blockchain and How Does It Work?

In the aftermath of the 2008 financial crisis, Bitcoin became an alternative to the existing financial ecosystem. More than a decade later, researchers continue to explore blockchain technology for a multitude of domains across numerous industries. Per a report by the World Economic Forum, around 10% of the global GDP will rest on blockchain technology by 2025.

Currently, some multibillion-dollar firms exploring blockchain applications include major banking institutions like JPMorgan Chase; automobile makers like BMW; technology players like Facebook, Amazon, and Microsoft; retail corporations like Starbucks and Nestle; and fintech firms like Visa and PayPal. Even governments across the globe are leveraging blockchain technology tools for applications in the public sector.

Per a Markets and Markets Report, the global blockchain market is expected to grow at a compound annual growth rate (CAGR) of 67% between 2020 and 2025. Deloitte published a survey revealing that 53% of senior executives considered blockchain to be a top priority for their organizations. Similarly, research institute Gartner estimates that blockchain technology will generate $3.1 trillion in new business value by 2030. PWC also released a study revealing that 84% of 600 organizations are actively involved in blockchain technology.

Blockchain technology has grown at unprecedented levels due to its wide applicability to many sectors. Even though cryptocurrencies are one of the top innovations of blockchain, the use-cases of blockchain have been explored in a myriad of fields, including health care, supply chain, Internet of Things (IoT), governance, real estate, online gaming, voting, and charity.

Blockchain Explained: What Is Blockchain Technology?

Put simply, a blockchain is a ledger that records data, documents, and transactions. “Blockchain” is a combination of the words “block” and “chain.” Data recorded on the ledger is stored on the blocks, and blocks are chained together in a cryptographical sequence.

More specifically, blockchain protocol possesses three fundamental traits: decentralization, a peer-to-peer network, and distributed storage of data. Let’s look at these elements one by one. 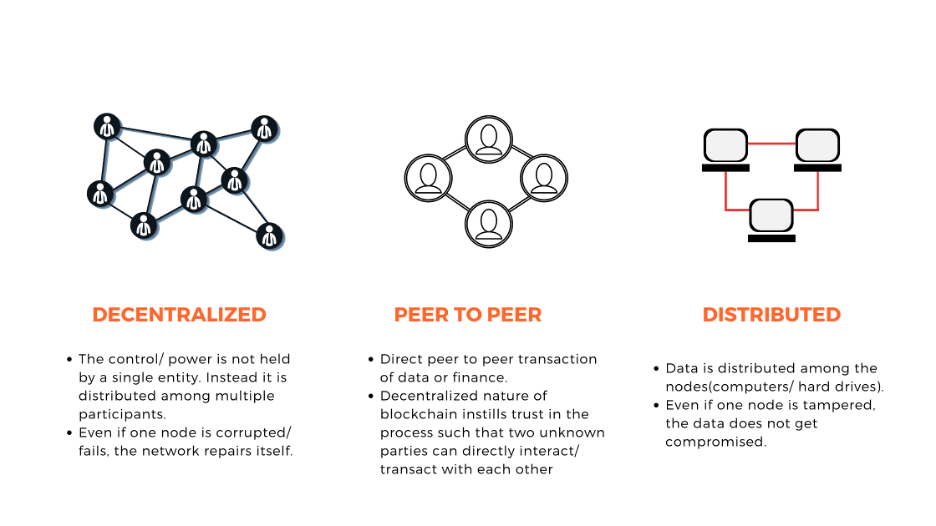 Blockchain Technology Explained: What is Blockchain and How Does It Work?

First, a blockchain is a decentralized network made up of multiple nodes or members. It does not have a central authority. Instead, control over the network is distributed among multiple participants. In a centralized structure, the entire system fails if the main node is compromised. However, a decentralized distribution ensures that the blockchain network continues to function even if one or more of the nodes is compromised.

Second, members directly interact with one another on a peer-to-peer network. For instance, transactions on the Bitcoin blockchain are conducted directly between two unknown entities without any intermediary organization, such as a bank. Similarly, two unknown entities can directly transact finance or data without any intermediary organization monitoring the process, instilling trust among the members and eliminating the need for a middleman.

Besides the fundamentals of blockchain protocol, the decentralized ledger incorporates eight key features that streamline the process for the storage and management of data.

In addition, the Bitcoin ledger is transparent, so any node can view these transactions. Each transaction, irrespective of its duration, can be traced back to its origin through its blockchain. Likewise, all transactions are conducted and updated on the blockchain ledger in real-time. Furthermore, a completed transaction cannot be reversed because the blockchain is immutable.

How Does a Blockchain Work?

While Bitcoin and cryptocurrencies have become a value-added applications of blockchain technology, the scope of the decentralized ledger is far and wide.   Blockchain ledgers are used by multiple industries to record, manage, store, and access data.

So, how does a blockchain function? 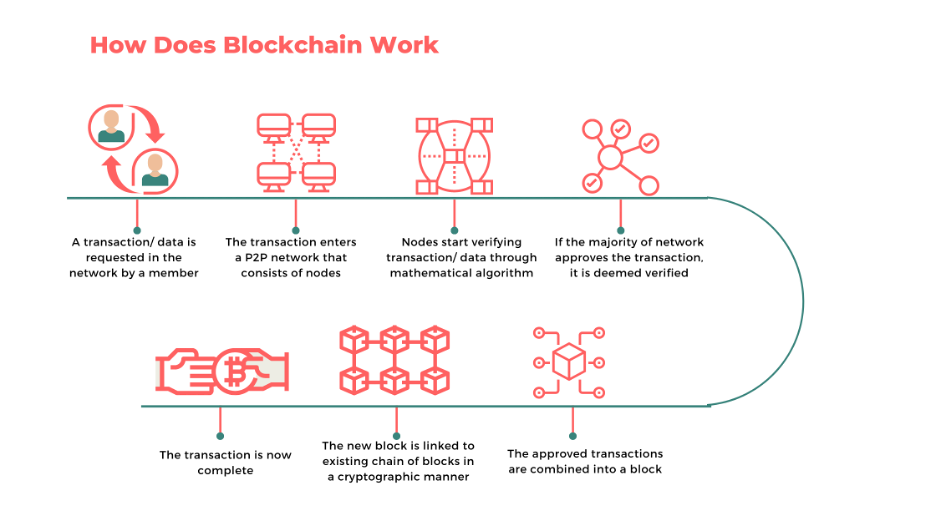 How does Block Chain Work

More specifically, a consensus mechanism conducts the verification process. In other words, if a majority of the network agrees that the transaction is legitimate, then the transaction is verified. Subsequently, the approved transaction is bundled with other transactions made within a specific duration and recorded in a block. The newly formed block is then connected to the previous block through a cryptographic-hashing protocol. Blocks are connected in a sequential manner such that any modification of data in any one block results in the incorrect sequencing of all of the blocks succeeding it as well. Similarly, cryptographic sequencing makes it impossible for a bad actor to tamper with data on the blockchain network. It also eliminates the opportunity for any participant to engage in fraudulent activities.

Each block is time-stamped with the time that it is added to the blockchain network. Once the data is updated on the ledger, all of the members in the network are updated in real-time as well. It cannot be reversed or modified. Likewise, a new transaction may be entered, but the previous transaction remains immutable.

While the first application of Bitcoin was a revolution in the financial sector, the applications of blockchain have now moved far beyond banking and finance. Fortune 500 companies, big league corporations, banking institutions, and governments are leveraging blockchain in various capacities.

Even though blockchain technology is still considered one of the top, recent innovations, the industry still has many obstacles to overcome. For example, there remain many questions related to the scalability of the blockchain network, potential vulnerabilities, security, and regulatory compliance that have yet to be addressed. Still, the technology has the potential to revolutionize numerous sectors. In the next five to ten years, we are likely to witness practical developments of blockchain on the ground.

Freeman Law represents virtual currency clients in the United States and Internationally. Contact us now or Schedule a consultation or call (214) 984-3410 to discuss your cryptocurrency and blockchain technology concerns.